Here’s a picture of Mytholm, Mytholme, or Mytham Mill in Uppermill on the morning of the excavation. 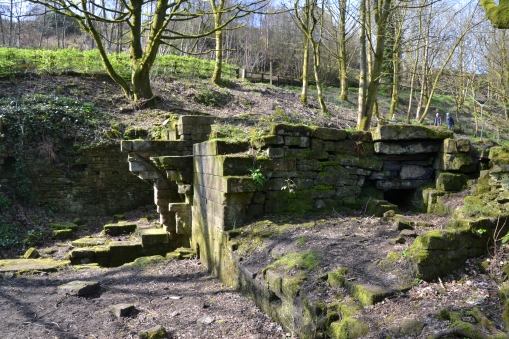 Residents of Saddleworth or anyone walking by the river from Uppermill to the garden centre (Newbank) would recognise this right away!

For anyone else though, if you look down from the canal with the Limekiln behind you it’s the ruined building in front of you, the viaduct and Uppermill on the left, the garden centre down the path to the right. Here’s a map.

The mill (Mytham then) was built in 1779 as a fulling mill by local merchants John Harrop, John Smith and Henry Whitehead.  At this time the woollen industry was expanding at a considerable rate creating a need for processing in a bigger faster way, but the developmental stage at the time produced industrial buildings that looked like typical weaver’s cottages.

This is a photo of it, probably early 20 Century

the fulling process at Mytholm would have meant that the hammering of the wool pieces would have gone on for up to 20 hours! The hammers were massive wooden blocks and were driven by an ‘overshot waterwheel’.  You can see the groove of the wheel here, and there was a dam to control the water constructed at the height of the first floor.  The dam is visible at the site.

Here’s an interesting legend on the extant wall at the other side of this grooved wall: it possibly refers to the height of the head water or of the wheel.

So why excavate?  Well just what the XV1 FEET refers to is one of the questions.  Another question relates to the location of the end wall of the building, and another to the location of the steam engine, which took over the power supply at some point before 1866.  We know that because it was sold by auction at that time along with a great deal of sawmill equipment.  Mytholm had ceased being a fulling mill in the 1840s when Hutchinson and Co turned it into the saw mill, and it is possible that the steam engine was wholly related to that business.  The blocks in the picture are assessed as being the stands for the engine, you can easily get to see them as they’re by the side of the river across from the mill site. 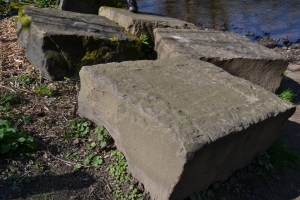 So the excavation began on the beautiful morning of 8th April 2017, managed by Norman Redhead, County Archaeologist, in association with the local archaeological group that is the Friends of Castleshaw Roman Forts.

Here’s Norman giving the first briefing to some of the team at the start of the day.

And below, Paul is setting up the Friends information boards and info.

In the early part of the day there were 3 trenches, looking like this. 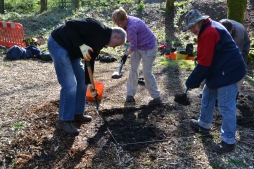 and Norman, Claire and Jack

Things moved on well and the weather held!  We always welcome visitors and we estimate that about 200 people talked to us during the day. 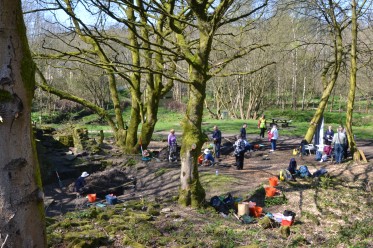 This is the major wall at the East Gate of the Mill.

The middle trench went down through demolition rubble to find a cinder level at around 65cm.  John dug a sondage of 50cm and found boiler waste, so it can be said that the boiler house was in that part.

This is the wall going East, there wasn’t time to find the back or the return.

The other trench found no structure of any consequence.

Finds were gathered, and Phil checked the spoil heaps….  There was… pottery, glass, metal and demolition rubble  … even a wall tie 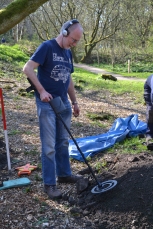 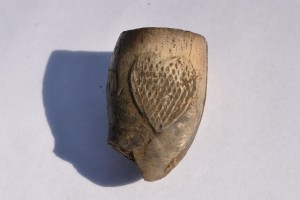 …a beautiful bone pipe-bowl carved with a heart and initials in a cartouche on the reverse…. more photos to be found in Norman’s report, I’ll let you know when it’s on the website.

Measurements were taken and photography done, then back-filling and closures

Norman gave the final briefing, some things are resolved but some tasks remain, enough for us to come back another day.

Here’s a picture of the group of workers.  I can confirm that they seemed happy and contented after a job well done on a beautiful spring day!

We’ll see you again somewhere then… but farewell for now, as ever, Bloggerina